This is the most concise and used and abused list I have ever written. This is my be all and end all list for going anywhere for more than 8 hours. This is the list I have been pining after for days. Maybe others have something more substantial, but for me, I cannot conceive of that being possible.
I read a mediocre book once, and the main guy was at a party and people were razzing him about his lists; he took his hands out of his pockets to mock-throttle one of them and a bunch of his lists fell out of his jacket, haha, yucka yucka yucka. That is not quite me – my lists are on my phone, the ipad or on the backs of random envelopes (channeling my mother) along the fringes of the kitchen. My paper lists rarely leave the house, but you get the picture. Besides the imaginatively titled “things to bring” list, the other most utilised list is my xmas list. I update it weekly as I have ideas or when I can confirm gifts ordered, but I’m not going to post that one. It also has on it things that I would like, so time-poor Husband may just order online, use the list as a guide or distribute it as he sees fit. That is the least-used list, actually, as there are few things that I really want, and actually, the same things have been on there for a few years running. So either someone is imaginative in their own right, or they are just not getting that particular memo, along the same lines as the infamous “TPS reports”. I hope I don’t get nailed by fate before I get my A into G and make my own version of the “JUMP…to conclusions mat” *cough*, cue the crickets. 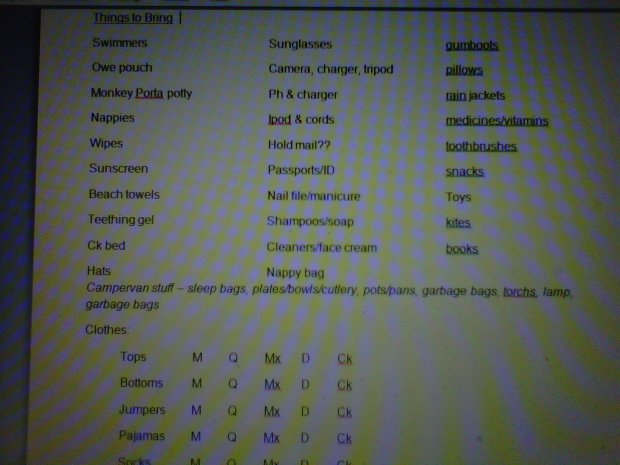