Because snow is apparently the end of the world, we were preparing for it. Husband charged batteries for the flashlights, the leapsters, phones, ipad, laptop, but not the car that has the chains. He reloaded my car with dry firewood from the barn and moved the outdoor pile into the garage, and then checked petrol levels in the jerry cans.
Snow was coming down thick and fast, and we got 15 + inches. 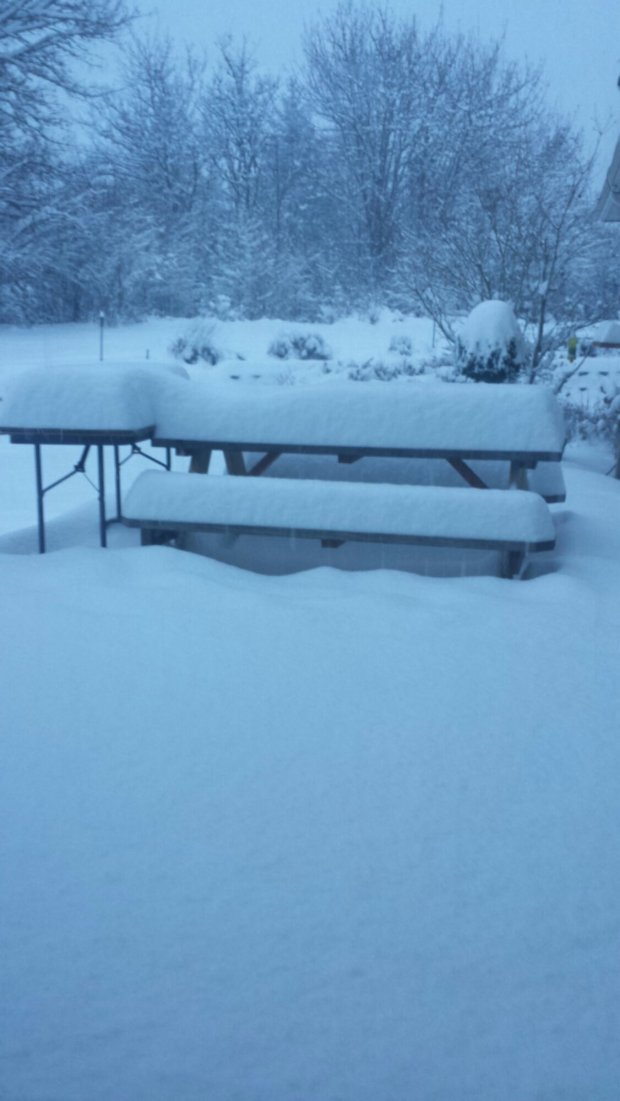 We have (a shit ton?) 6 toilets to share and flush throughout the house, so I wasn’t worried about running out of water. But we didn’t lose power and consequently the water pump, so we didn’t have to ration our bathroom breaks, and I still only have the 2 toilets to clean as a priority, and the rest can bugger off for a while longer.
The boys spent too long inside, annoying each other and watching lego game out-take movies waiting for the power to go out, but it didn’t go out, so they kept wanting to watch more instead of going outside to play in the white wonder that is usually so scarce. Eventually I changed out of my pajamas which signalled the end of indoor slouchery; everyone put on snow clothes and went outside to sled and whine about the cold. 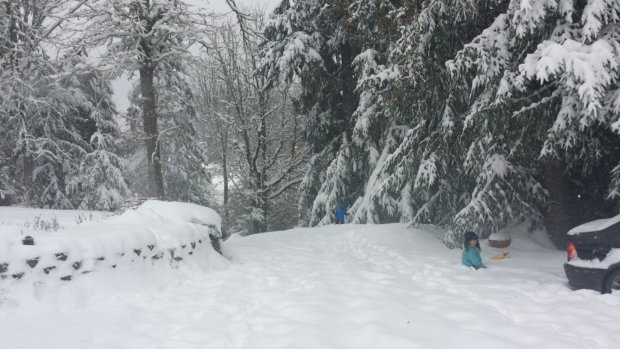 There were no injuries, even though the boys were sledding head first into snow-covered rocks, so the first aid kits remain mostly unused. There were no road accidents on our street, though dudes on 4 wheelers pulling dudes on sleds at high speed went up and back numerous times. There were no marauders – always a relief – and there were no asteroids falling through the atmosphere. No bleeding from the eyes or swarms of locusts (maybe they fot frozen), no pillaging of Fred Meyer. So all in all, a pretty piss poor end of the world.
We didn’t use ANY of our emergency food supplies, which was a good dose of reality in terms of how often we actually need to go shopping, and there is still a few drops of milk left for the boys to argue about. We didn’t cook anything on top of the fireplace, and we didn’t need to melt snow for drinking. We actually could have driven around town (the whole time?) yesterday afternoon, but chose to sit in front of the fire for a little while longer. I think we could have managed school today, but the boys aren’t complaining about another day playing legoes and I’m not complaining because they are upstairs doing it and there is no shouting (loud enough for me to hear) coming from that direction (cue the extended interruption).
So next time (I just downloaded the Red Cross Earthquake app) we will be prepared with all the things we didn’t use this weekend, including 3 bottles of red wine, yet unopened. That is the real disaster.

One thought on “Doomsday Prepping”